How to choose a more profitable cryptocurrency: Bitcoin vs. Ethereum

How to choose a more profitable cryptocurrency: Bitcoin vs. Ethereum

The cryptocurrency market has grown significantly in the past few years, with dozens of new digital currencies being released almost every month. The fact that any newcomer has plenty of choices makes the process of choosing a digital currency for mining a lot more difficult. This guide addresses to many users who can’t decide what cryptocurrency is the best for mining, the main candidates being Bitcoin and Ethereum.

Bitcoin is best known as the oldest and most reliable cryptocurrency in the world. Being the first major digital currency definitely played a great part in becoming what it's today. Ethereum is one of its main competitors. In fact, Ethereum is an improved version of Bitcoin because its developers learned from the mistakes and issues found in Bitcoin and made sure its users won't be dealing with any problems. Also, in the previous article we showed you how to mine Bitcoins on Windows PCs. Unlike Bitcoin, Ethereum encourages users to mine alone, eliminating the need to work in pool groups.

One way to figure out which of the aforementioned cryptocurrencies is more profitable is by using a mining calculator, like Awesome Miner. Here's what you need to do:

Launch the utility on your PC. Enter your miner information in the wizard assistant. 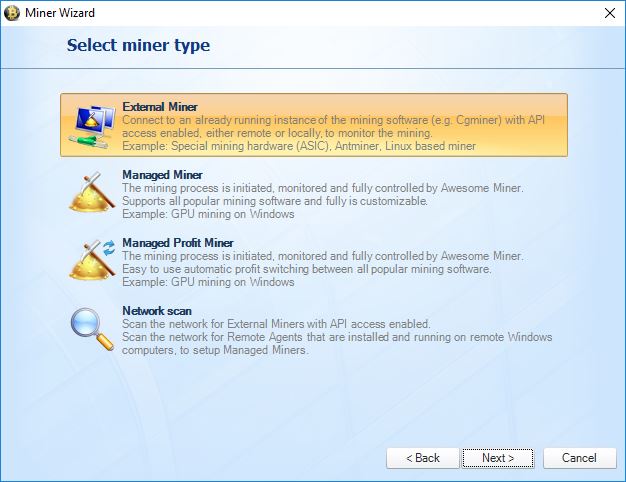 The utility will immediately calculate profits based on the performance of your hardware components. This ETH calculator also displays real-time coin values updates on the bottom side of the interface. To be more exact, the software is capable of converting Ethereum to USD to help you easily keep track of currency rate changes.

We would choose Ethereum as top cryptocurrency mostly because it brings more potential right now (compared to Bitcoin) for the users who are new to digital currency mining. With Bitcoin, those who started mining in the early days of the cryptocurrency have more capital than the newcomers ever will. Whereas Ethereum is rumored to have more than 50% of locked tokens which makes it possible for users new to mining stand a chance. Another aspect that plays an important part in choosing Ethereum instead of the popular Bitcoin is that the latter has seen its fair share of controversy over the years, the most notable one relating to security concerns.

Which of the two would you give your vote for: Bitcoin or Ethereum? Please let us know in the comments section below.

Tutorial tags
featured Oct 26, 2017
How to mine Ethereum on a gaming PC
featured Nov 14, 2017
How to buy bitcoins in a few steps
featured Jul 05, 2018
How to clean registry
Check our latest how to articles