How to use Xbox One controller on Mac OS X

by Vlad Tiganasu 6 years ago 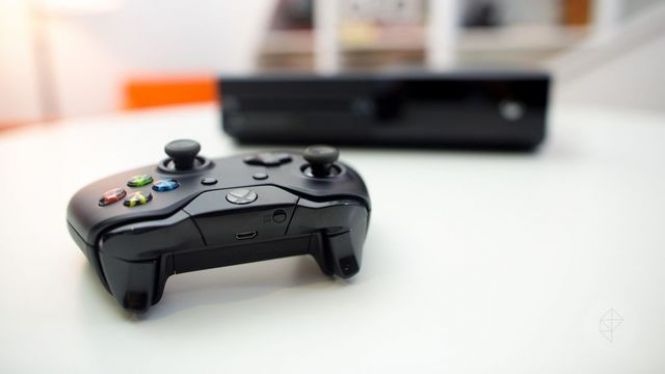 How to use Xbox One controller on Mac OS X

Xbox One is, currently, one of the two most widely-used gaming consoles in the world. If you played Xbox before you already know how great its gamepad is. Although Microsoft recently released drivers that will let you use Xbox One's controller with several versions of Windows, there is no driver that will allow you to use the Xbox One controller with Mac computers. Luckily, there are some third-party (unofficial) drivers that you can use to make your Xbox One gamepad work with your Mac. Although the whole process might seem a bit complicated, you will see that there is almost nothing  difficult.

Even though there are several third-party drivers available for download on the Internet, I recommend using FranticRain's Xone-OSX project. Simply go to its GitHub web page and download the driver on your Mac. A great thing about this project is the fact that it is open source, so, you can download and modify the source code as you see fit (if you have the necessary skills).

Using this driver will only allow you to use your Xbox One controller while it is plugged in via USB. You won't be abble to connect it wirelessly as the technology is proprietary to Microsoft .

First of all, before we install the driver, make sure to unplug your Xbox One controller in case you have previously plugged it in to test if it works.

You might have noticed that, after plugging in your Xbox One gamepad, it appears in the System Profiler window, but it doesn't actually work. This is why you need to install the driver.

After you have disconnected the controller, go to the GitHub page (in case you haven't already done that) and download the driver here.

Once you have downloaded the driver, simply run the installation file and follow the on-screen instructions, which are pretty straightforward. After the end of the installation process, you will be asked to restart your Mac. Save all your current work, reboot your system and, after your OS boots, simply plug in your Xbox One controller (you need an A Male to Micro B USB 2.0 cable). If the green light of your gamepad is on, that means the installation was successful. 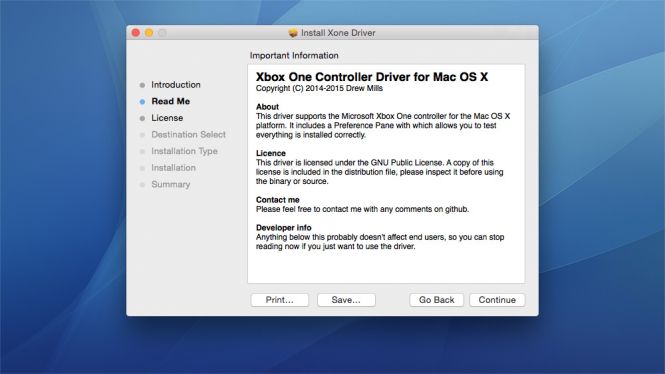 Now that you have installed the drivers and your Mac recognizes your Xbox One gamepad, it is time to start configuring it. To do so, open the "System Preferences" window and click on the "Xone Controller" icon. Here, you can easily test the response of your controller's buttons, modify its calibration and deadzone or invert both the X and Y axis for each of the sticks. 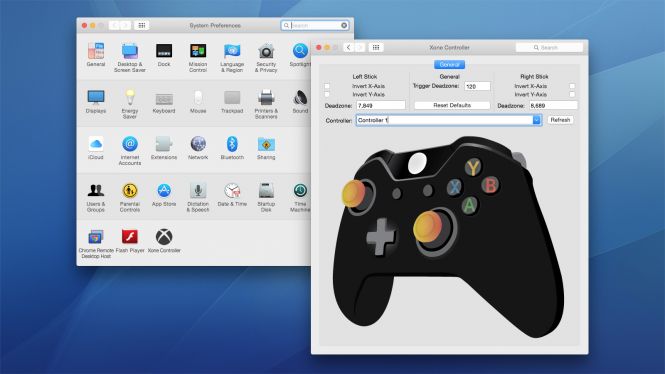 And that's about it. As you can see installing the driver and configuring the Xbox One controller is not that difficult, even though it is not a simple plug-and-play process as it is with PlayStation gamepads. One thing you should know is that, when configuring the Xbox One controller from within other applications or games, you might find it under a different name, like Xbox 360 Controller. Just ignore this fact, it will all work smoothly.

Even though the Xbox One controller is connected to your Mac via a USB cable, it will still lose charge, as the connection is only used for data transfer. So, when playing games, make sure you have charged batteries at hand, just in case you need to replace the ones on your gamepad.

Even though FranticRain's Xone-OSX provided me with a good gaming experience, along with an easy installation and configuration process, it might prove to be not what you are looking for. Therefore, if you are unhappy with the result, you are free to try other projects, such as Xbox One Controller Enabler, also from GitHub, or Xbox HID Driver from SourceForge.

Tutorial tags
featured Jun 09, 2018
How to learn to play football in FIFA simulators
featured Feb 26, 2015
How to Convert DOC to PDF on Mac OS X for Free Using TextEdit
featured Jul 05, 2018
How to clean registry
Check our latest how to articles