How to run Windows applications on Mac

by Vlad Tiganasu 4 years ago 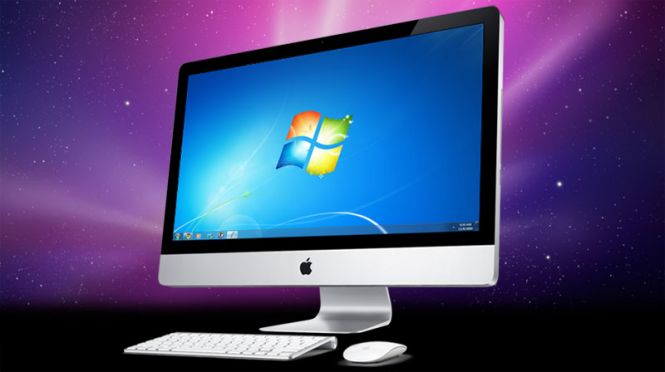 How to run Windows applications on Mac

The rivalry between Windows and Mac OS is well-known, and there are many applications that only support one of these operating systems. Even though there are many programs that are becoming compatible with both of these OS's with each passing day, there are still some that remain exclusive to either Windows or Mac. So, the question some of you might ask themselves is how can you run Windows-exclusive software on Mac? Well, you should know that there are several ways in which you can do that to play your games, use your favorite programs and do your business without having to switch between computers.

The first application for running Windows-based applications on your Mac that we will talk about is Boot Camp. This tool will allow you to install a fresh copy of Windows OS alongside your Mac OS X, giving you a dual-boot option (you can select which operating system to use). Also, you should know that this tool is included in your Mac OS X, so you won't have to sped any money buying it. 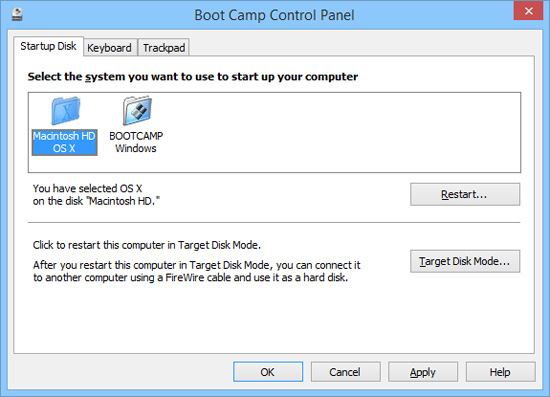 Using Boot Camp to run Windows applications and games offers you the best solution if you want to obtain maximum performance when playing the latest games or using your favorite resource-demanding programs. The downside of using this tool is that you won't be able to run both Windows and Mac apps at the same time, because you will have to choose which OS you want to use during startup, telling your computer how to behave (as either a Windows PC/laptop or a normal Mac).

Obviously, when using Boot Camp, you will also need a Windows license for installing Windows OS.

Now, if you don't want to install a copy of Windows on your Mac, or if you simply don't desire to purchase a license for it, then you can use Wine. This application will not install a new operating system on your drive, nor it will emulate a Windows virtual machine that will use a big chunk of your system resources. So what does it do, you ask? Well, as the developers state, Wine is a "compatibility layer" that allows you to run Windows-based apps on your Mac. Basically, this tool will trick your programs into thinking they are running on a Windows OS by translating their requests for system resources like memory or disk space. You won't even need to purchase a Windows license becase you won't actually have to install the operating system.

Wine requires an Intel processor in order to run, so, you might want to check your Mac's CPU, especially if it's an older one (before 2006). 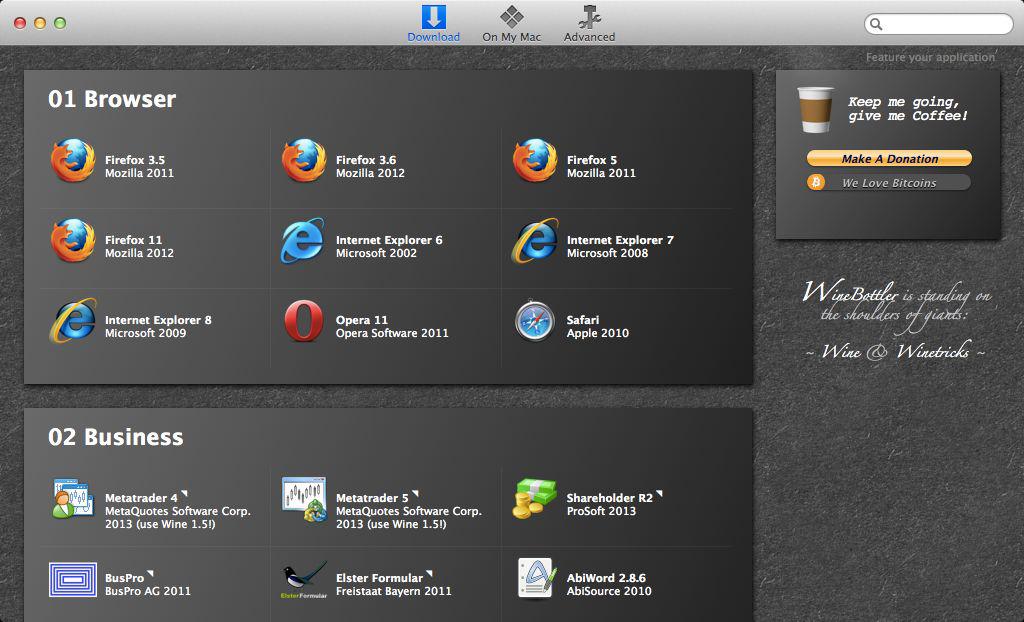 One downside of Wine is the fact that it doesn't offer a graphical interface, and you need to have some command-line knowledge in order to use it. But, if you don't want to deal with this, there is a free-to-use third-party application you can install that makes the task of running Windows programs on your Mac much easier. It's called WineBottler.

Keep in mind, though, that even thoughf Wine seems to be a godsend tool, you might encounter some bugs or applications that won't run. You can always check the compatibility of your program by accessing the Wine application database (AppDB).

If both of the above mentioned methods don't suite you, then you can always turn to virtual machines to emulate a Windows system on your Mac. Applications like VMware Fusion or Parallels Desktop will help you reach that goal, but they can be quite expensive, especially considering the fact that you will also have to purchase a license for your Windows OS. Of course, there are some free-to-use alternatives, like VirtualBox, but when talking about 3D graphics and OS integration, they not as good as the ones mentioned before. 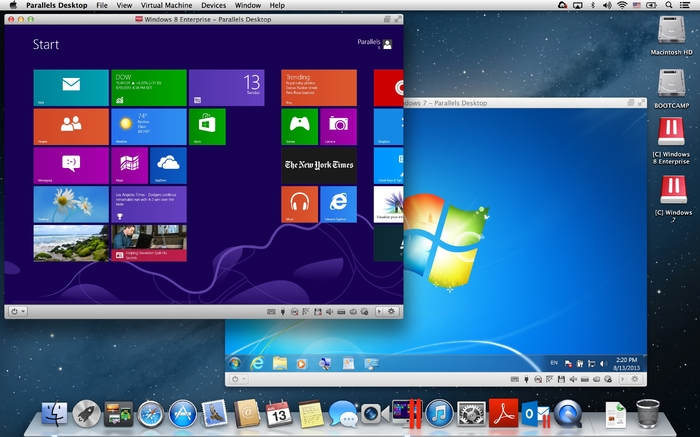 Even though virtual machines offer you a great way to run both Windows and Mac applications side-by-side, the downside of running a different operating system from within your OS X is that they will consume some of your system's resources. Basically, you can forget trying to play all the latest games or running resource-demanding applications like CAD tools or video processing software on a virtual Windows machine. However, they can prove to be useful for testing programs or running older apps without having to restart your system each time like you would with Boot Camp, for example.

Last, but not least, you can always use CrossOver and run Windows programs on your Mac without having to reboot your system or install Windows OS. Even if CrossOver uses Wine code in order to run applications, it provides you with a intuitive graphical interface and it, allegedly, offers support for more apps than the latter (you can see the list of supported tools here). 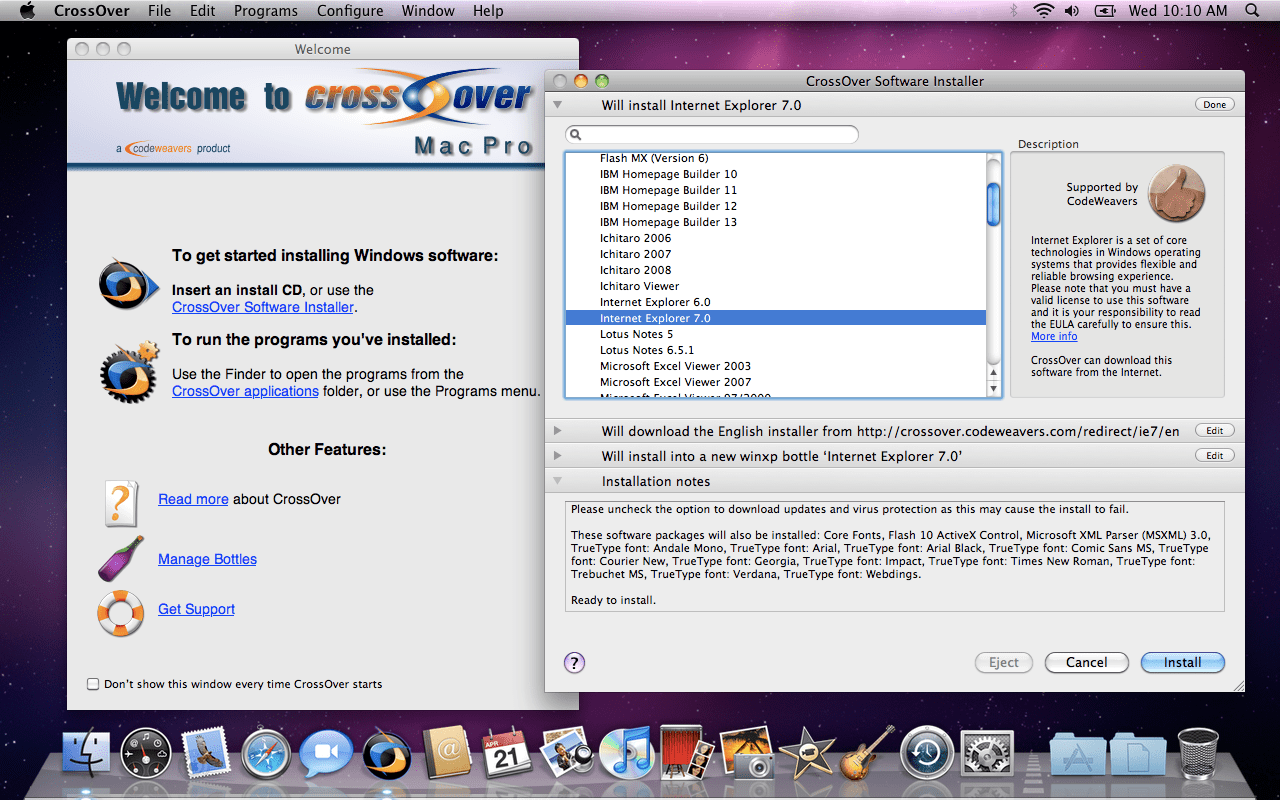 Same as with Wine, using CrossOver is not a perfect solution for running Windows programs on your Mac. You can still encounter bugs when trying to run applications, and some of them might not work at all. However, if you are having problems running any of the supported apps, you can always contact the developers (CodeWeavers), and they will help you fix the errors.

Now that you know of these methods, it is entirely up to you to decide which one to use in order to run Windows applications on your Mac. If you don't want to sped a lot of money, you can try using Wine or CrossOver, but expect compatibility issues and other problems, or, if you want to make sure that your all of your apps will work at maximum performance, I strongly recommend using Boot Camp. You can even turn to other solutions, such as using a remote access tool, but that will require both a Mac and a Windows PC but, honestly, from my point of view it is just not that efficient (as you can, probably, just move to the Windows PC and normally use it).

Tutorial tags
featured Oct 06, 2015
How to take screenshots on Mac OS X
featured Nov 03, 2015
How to change the appearance of OS X Terminal
featured Jul 05, 2018
How to clean registry
Check
our latest
how to articles