How to take screenshots on Mac OS X

How to take screenshots on Mac OS X

Taking screenshots on your Mac is quite a simple process, and it can be useful in many situations. For example, if you want to take a picture of a funny conversation you might have had with a friend and post it online or if you want to show an error that occurred on your Mac to a technical expert, then capturing your screen and saving it as an image file is always a good solution, since it is much easier than explaining what's going on. Regardless of your needs, Mac OS X provides you with several ways in which you can take you screenshots, and I will describe each method in the guide below.

Mac OS X comes with a built-in feature that allows you to quickly capture your screen simply by using keyboard commands. Depending on the command used to take the screenshot, the images will be saved either on your desktop or they will be copied to the clipboard so that you could paste them wherever you will want. Without further ado, here are the above mentioned commands and their roles:

You might want to know that the screenshots created using this method will be saved in PNG.

You might not know this, but Preview, Mac OS X's default image and PDF document viewer, also comes with a handy screen capture feature. Another good thing about Preview is the fact that it offers some basic editing tools, so that you can quickly edit your screenshots (like, maybe, adding arrows or circling areas to highlight a certain item) and gives you the possibility to export your captured images in various graphics formats.

In order to do that, after launching Preview, go to the "File" menu and click on the "Take a screenshot" option. Once you have done that, you will notice that Preview offers you three (3) ways in which you can capture images: "From Selection" - take a screenshot of an area from your screen, "From Window" - take screenshot of an opened window and "From Entire Screen" - take a full-screen screenshot. 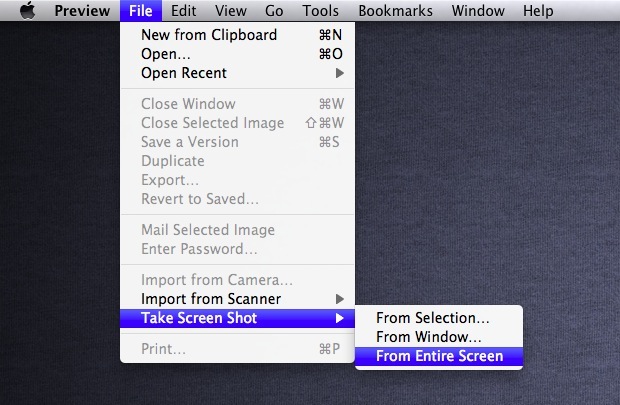 After taking your screenshot, the image will appear in Preview, from where you can easily edit it or save it in any desired location and in whichever format you want.

Did you know that Mac OS X comes with a built-in screen capture application? Well, if you didn't, then it is time to meet Grab. After launching this utility (by accessing the Utilities folder under Applications), all you have to do is click on the "Capture" menu item and select what type of screenshot you want to take. Just as with the above mentioned methods of taking screenshots, Grab, gives you the possibility to capture areas of your screen, take a screenshot of the entire screen or of a specific window.

Additionally, this app offers you a special method of capturing images of your screen, called "Timed Screen". This option allows you to take a screenshot of your entire desktop after a 10 (ten) seconds delay. It can prove to be quite useful when dealing with interactive items that collapse or disappear when they are not focused.

You don't have to always click on the "Capture" and select which type of screenshot you want to take, because Grab also provides you with hotkeys that you can use to call each screen capture method. You can even change the default hotkeys, among other things (like the default directory where the images are saved), by accessing the settings menu.

Beside the methods of taking screenshots presented above, there are also many other third-party applications that you can use to capture your screen (or areas of it). Many of these tools come with various extra features and might come in handy if you are looking for things like advanced image editing options or the possibility to save the images in some specific format. So, if you want to use third-party programs to take screenshots, then apps like Lightshot, Skitch, SnagIt or Jing might prove to be what you need.

As you can see, there are many ways in which you can take capture your Mac's screen. I recommend you try the methods that Mac OS X already provides you with and, if you are not satisfied, then you can opt for other third-party applications to help you with taking your screenshots.

Tutorial tags
featured Feb 17, 2016
How to run Windows applications on Mac
featured Jun 20, 2016
How to Work on your Mac using Keyboard shortcuts
featured Jul 05, 2018
How to clean registry
Check our latest how to articles